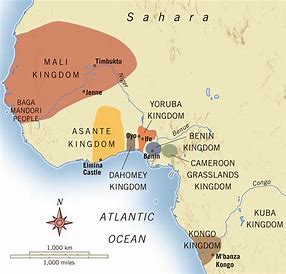 Known for: The Asante kingdom was one of the richest, most powerful, and enduring dynasties in West Africa.

The Golden Stool of the Asante is said to contain the soul of the nation.

The Asante kingdom began in the 1670s, when its leader, Osei Tutu, (Oyoko Clan) defeated his opponents. He united many clans into a confederation of states and created a capital called Kumasi.

Osei became known as Asantehene, meaning King. He started a festival called the Odwira Festival, which everyone in the Asante empire attended.

In the 18th and 19th centuries, the Asantes were famous for their gold and their ‘Golden Stool’ which the Asantehene sat on. Tradition states that one of the high priests of the empire conjured up the Golden Stool from heaven. This stool brought unity to the Asante states and each king was crowned sitting on it. The golden stool, to this day, remains a symbol of unity for the Asante people.

Their strong economy and society were very important, and the empire was known for its inventive brass weights, which were used to weigh gold.

Between 1823 – 1873 they fought the British, who wanted to control the territory. In 1874 British forces invaded, capturing Kumasi. The Asante empire rebelled through many uprisings, including a brave resistance led by Yaa Asantewaa, known as the Queen Mother. However, in 1902, the British defeated the Asante Empire, colonising that part of Africa. The Asante people gained their independence from Britain in 1957.