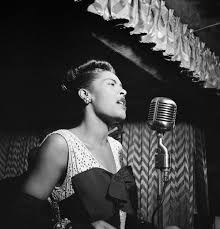 Diana Ross played the role of Billie Holiday in the film, Lady Sings the Blues.

Billie Holiday had no training, but became a leading jazz singer of her time.

If I’m going to sing like someone else, then I don’t need to sing at all.

Billie Holiday was born Eleanora Fagan in Philadelphia. She spent her childhood in Baltimore. In 1928, she moved to New York City to be with her mother, where she found a job singing in a Harlem nightclub. She had no formal musical training but developed a unique and moving singing style.

In 1933, Billie Holiday made her first musical recordings with Benny Goodman. Two years later, a series of recordings brought her wider recognition, and launched her career as the leading jazz singer of her time.

Billie Holiday was recording for Columbia Records in the late 1930s when she was introduced to Strange Fruit, a song based on a poem about lynching written by Abel Meeropo. It was heard by Barney Josephson who introduced it to her. She performed it at the Café Society club in 1939, with some dread, fearing retaliation. She later said that the imagery of the song reminded her of her father’s death, and that this played a role in her resistance to performing it.

She later performed exclusively in cabarets and concerts. Her music between 1936 and 1942 marked her peak years. God Bless the Child became Billie Holiday’s most popular and most covered record. It reached number 25 on the charts in 1941, and was third in Billboard’s songs of the year, selling over a million records. In 1976, the song was added to the Grammy Hall of Fame.