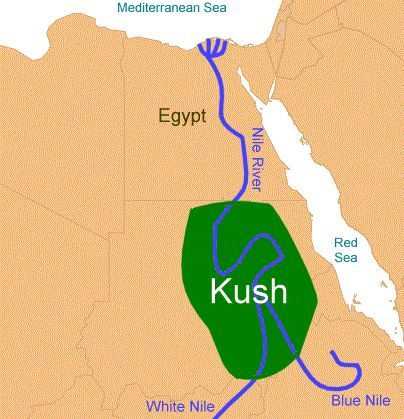 Known for: The Kingdom of Kush was known for its famous archers, and was called the “Land of the Bow” (Ta-Sety) by its neighbours in Ancient Egypt.

Kush centred in what is today's Northern Sudan.

It overthrew and conquered Egypt, making its own dynasty of Pharaohs.

Located on the banks of the Niles River. Fertile soil and abundant water were plentiful. The region grew rich from farmlands.

The Kingdom of Kush existed for more than 3000 years and was part of Nubia, the area of land between the Cataracts of the Nile. There were capitals in Kerma, Napata, and Meroë. It helped to create the cultural and political landscape of Northeast Africa.

Kush was a major trading centre for goods from Africa, the Arabian desert, and the Mediterranean. Nubian people traded things like gold, ivory, ebony, animal furs, and sometimes live animals. Because sailing across the Cataracts of the Nile was dangerous, goods had to be imported from the Red Sea to the east of Nubia, instead of along the Nile.

The Kingdom of Kush is the most famous ancient civilisation in Nubia. When Meroë was the capital, the Meroitic language was spoken by people living there until around 400 AD. This language is not widely understood today because not many Meroitic texts have survived; the earliest one dates from around 180-170 BC.

Amanirenas was a fierce Kandake (Queen Mother) from Kush. She is famous for being blind in one eye, and for leading an army of Kushite warriors in battle against the Roman Empire. During this battle, Amanirenas’s soldiers captured the bronze head of the first Emperor of Rome, Augustus. It was taken back to Meroë and deliberately buried under the steps of a temple that was built to show the Kandake’s victory over the Romans!

The main cities of Kush were situated along the Nile River, the White Nile River, and the Blue Nile River. Today, the land of Kush is the country of Sudan. Historians are only just starting to discover the amazing pyramids in Sudan.

How long did the Kingdom of Kush last? What did the Nubian people trade? What were the three capitals of the three Kushite Kingdoms that ruled Nubia for other 3,000 years?