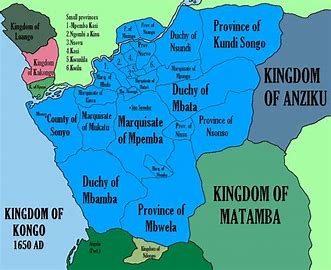 Known for: The Kingdom of Kongo was a bustling centre for trade, and one of the most powerful states on Africa’s West Coast.

The capital of the kingdom was Mbanza Kongo.

The kingdom of Kongo had a population of well over 2 million people at its peak.

The kingdom produced its own goods via specialised groups of craftworkers such as weavers (who produced the famous raffia fabrics of Kongo), potters, and metalworkers.

The Kingdom of Kongo began in the 14th century in West Africa, when a group of Kongo people moved south. They conquered smaller kingdoms and in the mid-15th century a unified Kongo Kingdom was formed. It included parts of what is today known as Angola, Gabon, the Republic of Congo, and the Democratic Republic of Congo.

Because of its location, Kongo was able to trade its natural resources with European merchants. Historians have found evidence of wealth and craftsmanship including pottery, beautiful fabrics, such as velvet and brocades, and metalwork.

The Portuguese were impressed by the trading systems of the kingdom, and they formed a diplomatic relationship in the early 1480s and started trading.

The Kingdom of Kongo had an estimated population of well over two million people.