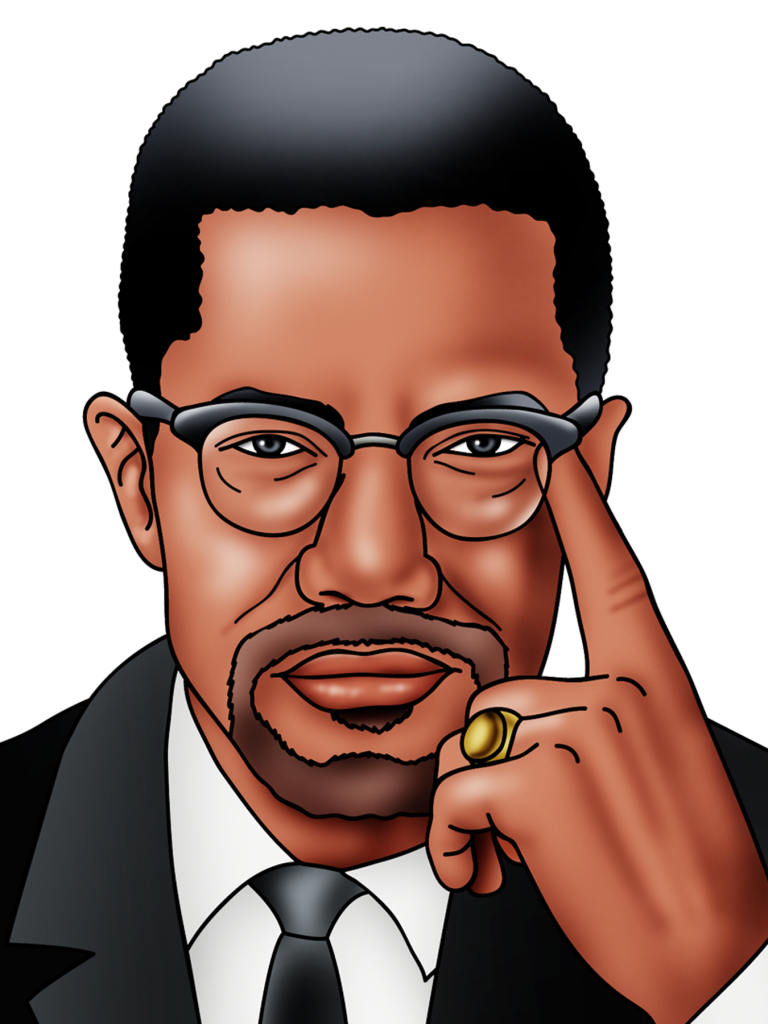 Known for: A leader in the civil rights movement and fighting for the rights of Black people around the world.

Malcolm's legacy remains as a beacon of racial pride and Black nationalism.

He became the National Representative of the Nation of Islam.

He started the Organization of Afro-American Unity.

Education is the passport to the future, for tomorrow belongs to those who prepare for it today.

Malcolm X’s birth name was Malcolm Little. He was brought up by his mother, but she had limited money following his father’s death. This was made even worse by the Great Depression, when many Americans lost all of their money and ended up in poverty.

Because they did not have a lot of money, Malcolm had to live with a foster family at the age of thirteen, as his mother could not look after him.  Malcolm went to Mason High School, where he was one of just a few Black students. Malcolm was really smart, excelled academically at school, and was even elected as class president. Malcom really wanted to become a lawyer, but he was told by his teacher that there were very few opportunities to have a good career because he was Black. Malcolm decided to drop out of school at fifteen and moved to Boston.

In the 1940s, Malcolm felt he had no opportunities to make his life better, so he turned to crime. In 1946, he was sent to prison after he was caught stealing. While he was in prison, he joined a new religious group called the Nation of Islam. He believed this was the true religion of Black people. He changed his last name to ‘X’.

After his time in prison, Malcolm X worked for the Nation of Islam. He was a powerful speaker and a born leader, who gained followers for his new religion wherever he went. As the Nation of Islam grew, Malcolm X became involved in the civil rights movement. He did not agree with Martin Luther King Jr.’s ‘peaceful protests’, and wanted a separate nation for Black people, rather than Black and white people living together equally. He believed that it was important for independence and Black identity, and that this should be the aim for the Black community. Malcolm wanted to empower Black people because of how they were being treated.

After the  Nation of Islam

Malcolm eventually left the Nation of Islam, and became more involved in civil rights. He began to work with other leaders, like Martin Luther King Jr., and he created a lot of change for Black people in America. He made the change to explore a peaceful revolution, instead of one that highlighted the need for violence to protect Black people. Malcolm wrote an autobiography with someone else before he died. His book, The Autobiography of Malcolm X, sold 6 million copies. The book stated his beliefs on Black nationalism, race pride, and pan-Africanism. The book was published right after his death, and became a best seller.

Malcolm’s legacy is that he wanted to make things better for Black people. He faced racism and challenges during his life, but he had a significant impact.

Why do you think Malcolm changed his name?