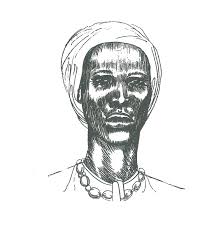 Known for: Being a military leader.

Nanny of the Maroons was known for forming a settlement for freed enslaved people, as well as uniting people against slavery and the British Colonists.

Nanny was born in Ghana, but was captured and transported across the Atlantic Ocean to Jamaica. Like many others before her, she was forced to work as an enslaved person on a plantation under terrible conditions. Along with her four brothers, she escaped from slavery and went to live in the mountains, in communities formed by those who had escaped slavery, known as Maroons. She often went to European-owned plantations and freed those who were enslaved there.

She became an enemy of the British and plantation owners. Nanny was very brave, and was not afraid of fighting against the British, who were by far the strongest army in the world at the time. They also occupied the largest territory in the world, with access to weapons, such as muskets and cannons, as well as well-trained soldiers.

Due to her activities, the British launched an attack on her territory, known as Nanny Town. Along with the Maroons, Nanny fought them off for over ten years, before they defeated her and signed a peace treaty with her brother. It is believed that she was killed by the British in 1733.

For her work to free enslaved people and fight the British, she was awarded the Order of National Hero after her death. To this day, she is the only woman to have received this award.

Her image can be found on the $500 Jamaican note, which is known as a Nanny.

What words would you use to describe Nanny? How is Nanny a good role model? If you could ask Nanny one question, what would it be?