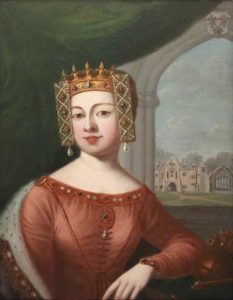 Known for: Queen of England as the wife and political adviser of King Edward III.

She was the first Black queen of the English throne.

She was recognised for her intelligence, kindness, and compassion.

Queen Philippa, although born in France, became Queen of England when she married King Edward III – at the same time, becoming the first Black Queen of the English. She was from Hainault (now in Belgium) which was once under Moorish rule and an emissary sent by Edward II before her wedding she was described her as “Her eyes are dark,… Her nostrils are also broad, her mouth fairly wide… Moreover she is brown of skin all over, and much like her father”.

King Edward married Philippa for political reasons, but the marriage seemed to work out well. Queen Philippa settled into her new life and was well-known for her intelligence, kindness, and compassion.

She sometimes accompanied her husband on his trips to other countries, and even served as a regent while he was away at war. She performed this role very well, which earned her even greater respect from the people.

Queen Philippa had one big problem, and that was her mother-in-law, who refused to give up her title, even though her son now had a wife to whom it rightfully belonged.

Edward solved this problem by banishing his mother from the palace and having her live under house arrest for several years. This is how Philippa became the true queen.

The people of England described Queen Philippa as a very social person. They also recognised that her intelligence helped her husband govern the kingdom well.

What made Philippa a good Queen? What was Philippa’s greatest achievement and why? What are good qualities to have as a queen – and how many of these did Philippa have?