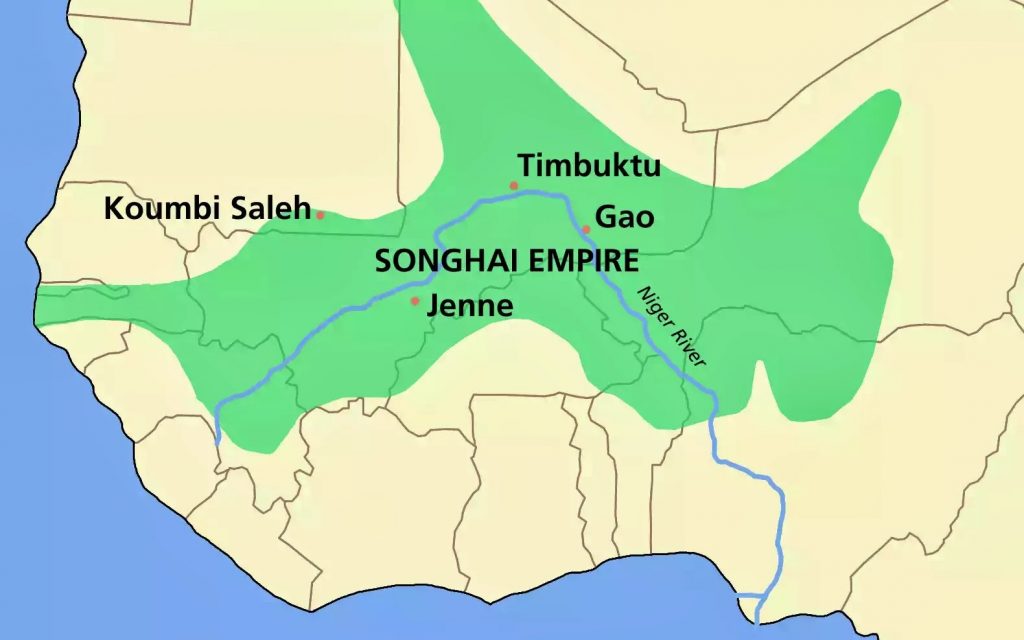 Known for: The Songhai Empire was an important trade centre, also known for its artwork, boat building, and religious practices.

From the early 15th to the late 16th century, Songhai was one of the largest African empires in history.

This empire had the same name as its leasing ethnic group, the Songhai.

Origins of the Empire

The Songhai Empire was the biggest and last of three major empires in West Africa. The Empire grew in all directions out to the Atlantic Ocean. At its strongest, Songhai was one of the largest states in African history.

The capital city, Gao (on the Niger River), was founded by the Songhai people in around 800 CE, and was made the capital city by ruler, Dia Kossoi, in the 11th Century. It still exists today!

In the late 13th century, the first rulers formed the Sonni Dynasty. While they were still ruling, Gao and the surrounding areas became important for trade. The growing Malian Empire in West Africa was interested in taking over this area because it was useful for trade.

Mali conquered Gao at the end of the 13th century. The Malians ruled until the late 14th century, before the Songhai took back control. They were strongest under the rule of Sonni Ali, and became more powerful than the Malian Empire.

After the Sonni Dynasty (c. 1464-1493) came The Askia Dynasty (1493-1592). At that time Gao was home to the Gao Mosque and the Tomb of Askia, which was built for the most important of the emperors of Songhai, Askia Muhammad.

He was famous for making the Empire stronger and making links to trade with countries around the world in places like Europe and Asia. He also made schools for children, and established the religion of Islam in the empire.

The end of the Empire

Things got worse during the rule of Askia Ishaq I (1539-1549), who was very brutal and cruel. In 1591, the Songhai Empire fought and lost to Morocco (led by Sultan Ahmad al-Mansur) in the Battle of Tondibi.

From 1591 to 1901, Emperors from Songhai tried to keep the traditions of the old empire alive. However, in 1901, the French colonial army invaded Lulami. The Songhai legacy was eventually wiped out.

Why do you think the Malians, Moroccans, and then the French decided to invade the Songhai Empire? What did Emperor Askia Mohammad do for his people and his empire? What ideas do you have for different ways that Songhai’s leaders could have strengthened their empire?