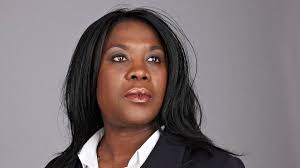 Known for: Being an Olympic athlete.

Sanderson was the second athlete to compete in six different Olympics.

She was appointed as a Commander of the British Empire in 2004.

Sanderson is now a model for magazines and shops.

When I see somebody get hurt, it hurts me too, especially in my community and my family.

Tessa Sanderson was born in Jamaica, where she lived until she was six years old. She then moved to Wolverhampton, England, with her parents. When she was young, she loved playing sports. Her PE teacher at school noticed her talent for athletics and encouraged her to train.

She joined a local athletics club and began to compete as a teenager. When she was sixteen, she won the English Schools Intermediate javelin championship. She broke the junior record five times and the senior record ten times.

In 2006, Sanderson started an academy in Newham, London, that helps to find and train athletes to represent Britain. A mother of twins, she continues to work to bring more young people into competitive sport and give those with less money a greater opportunity to succeed.